At 4:30pm on Friday, July 8th  Cyclocross champion racer Jeremy Powers met the Cadence Youth Cycling Race Team; 8 students, and several Cadence coaches, at Penn Treaty Park. He discussed his career, answered questions from the students, and explained how he got into cycling as a kid.

It was the beginning of an exciting weekend for the Bicycle Coalition of Greater Philadelphia’s youth cycling program, Cadence Youth Cycling, and others from around the region interested in the sport of professional cycling.

After that, there was the Q&A with Powers at Firth and Wilson Transport Cycles. Rapha sent their Mobile Cycle Club and were pouring espressos out front. The FOO truck was set up out front, as well and the event was sponsored by Lagunitas Brewing Co.

Beginning at 8pm, Krystal and Tamia then talked about Cadence Youth Cycling spoke to the audience, then Powers spoke for a short time, then answered questions from the audience.  Many of the questions focused on cyclocross racing, health, diet and the challenges American pro cyclists face racing in Europe. A Verge Sports Raffle was held soon afterwards.

After the formal program, Powers stuck around for an hour taking photos and signing autographs, socializing with everyone there.

The next morning was the main event of the weekend: Jeremy Powers’ Cyclocross Clinic, which had been sold out for some time. The clinic was exclusive and capped at only 3 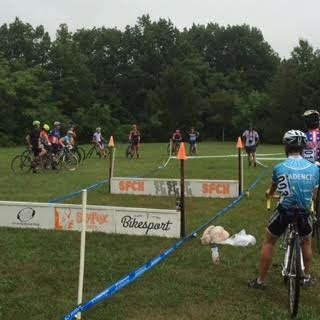 Last minute course repairs were done by Sly Fox CX and BikeSport. BikeSport and Rapha set up, then the group watched the Tour with Jeremy Powers for a little bit as it began raining

Powers went over the fundamentals of Cross racing with demonstrations of skills and drills. Dan Chabanov of Pointway Performance Coaching and Richard Sachs CX was on hand as a assistant coach.

The group broke for lunch at noon. Sly Fox catered lunch with sandwiches and salads.

After lunch Jeremy demonstrated how to tackle the infamous Sly Fox “Fox Hole Run up.”

At the very end of the clinic, it down-poured for 30 minutes, making the race simulation even better because it got muddy simulating typical fall racing conditions. The sun eventually came out for everyone getting together for last words.

Powers took photos, signed autographs, and hung out with the group before heading back to Massachusetts. Powers had to return home to prepare for the annual benefit ride he organizes for his JAM foundation.

Posted by Randy LoBasso at 3:42 pm