The Case for Protected Intersections on Spruce and Pine

One of the many problems with bike lanes in Philadelphia is at the intersection. Nearly all bike lanes against the curb combine with motor vehicle right turn lanes at intersections, creating what are called “Mixing zones.”

Mixing zones require right turning vehicles to merge with bike traffic, while yielding to the cyclist. The purpose of mixing zones is to prevent one of the most common types of crashes known as a right hook. Most cyclists have experienced right hook close calls where drivers will try to turn right into their path. This is exactly what happened to Emily Fredricks.

Our anecdotal observations are that the mixing zones on Spruce and Pine are frequently ignored by right turning drivers, especially the larger and heavier vehicles. 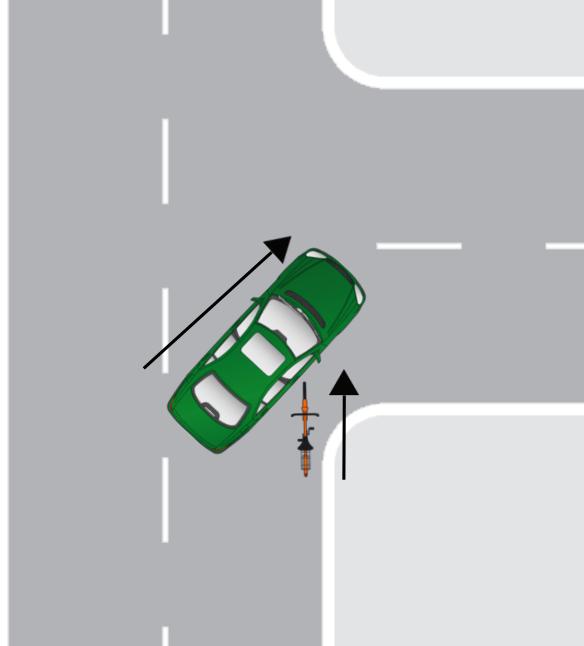 We feel one of the most important protections for cyclists is to come up with alternatives to the mixing zone.

One suggestion is to replace the dashed line with curbing and a corner refuge island. This proposal is a modification of curb extension pending further engineering evaluation.

Curb extension is in brown, with bike lane pass through in green

The question is, can you create a turn long enough for to motorist see an approaching bicyclist or pedestrian?

A more comprehensive redesign of the streets to modernize the bike lanes on Spruce and Pine Streets could be to move the parking from the left side into the middle, creating a parking-protected bike lane.

Approaching intersections, the parking lane would become a curbed buffer that reduces motorists’ blind spot by requiring them to slow down and complete more of the turn before crossing the bicycle lane. Designing a protected bike lane can also not only reduce conflicts with SEPTA buses but a good design could enhance the bus stops.

Ultimately, any changes to the street should consists of a working group of traffic engineers, planners, advocates and residents.

This working group, even more than proposing a particular design, should be explicit about the trade-offs reflected by each design/engineering decision. It’s those trade-offs that decision-makers need to own.