Camden Celebrates The Opening Of A New Waterfront Park

By Jordan Miller and John Boyle

Looking out over the Delaware River at Phoenix Park in Camden. The USS United States is in the background.

Phoenix Park has arisen from the ashes of a former industrial site on Camden’s Waterfront South neighborhood. This 5-acre riverfront park, which partially opened in 2015 was developed by the Camden County Municipal Utilities Authority (CCMUA) and offers access to the waterfront and brand new public views of Central and South Philadelphia.

Yesterday CCMUA president Andy Kricun along with Freeholder Jeff Nash and Monsignor Michael Doyle, a community activist who has been a major driver of change in Waterfront South cut the ribbon on the park. In attendance were representatives from Urban Trekkers, PowerCorps Camden, and students from Sacred Heart School.

Phoenix Park is about 2 miles south of the Ben Franklin Bridge and is easily accessible by bicycle. If you are not comfortable riding through the city’s quiet but somewhat blighted streets (3rd and 4th St) then you can ride the PATCO Train to Ferry Avenue and bike west on bustling Ferry Ave to the Waterfront.. While in Waterfront South also consider visiting the Camden Shipyard and Maritime Museum. 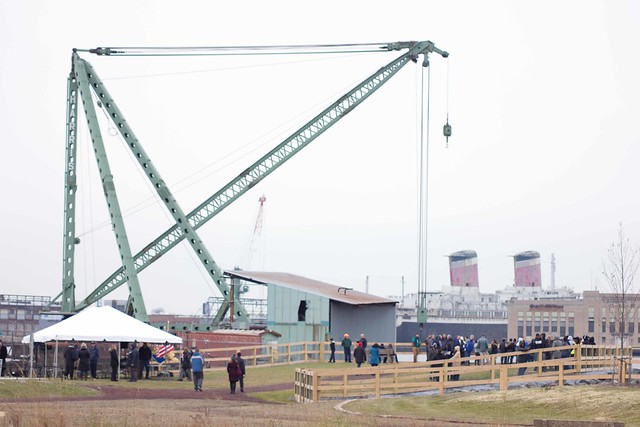 Posted by Bicycle Coalition at 9:29 am